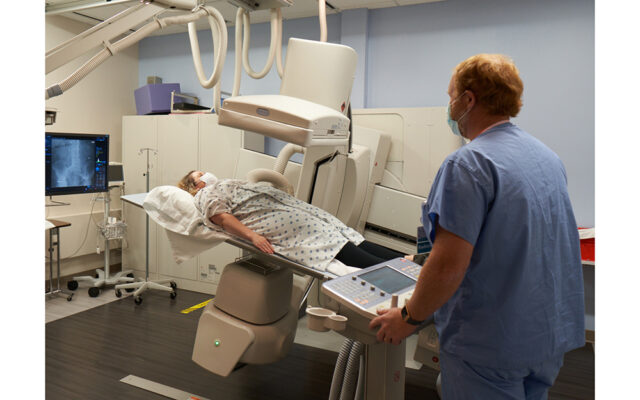 Contributed • September 27, 2021
Northern Light Dialysis in Presque Isle is marking its fifth year in its new facility. The upgraded space, which was made possible with the support of community donations, has made dialysis easier for patients to undergo.

PRESQUE ISLE, Maine — Northern Light Dialysis in Presque Isle is marking its fifth year in its new facility. The upgraded space, which was made possible with the support of community donations, has made dialysis easier for patients to undergo.

“The new space is so much nicer,” said patient Chad Gallop. “It’s a fantastic facility.”

Formerly known as the County Dialysis Center, the facility opened in 1997 after much community involvement to raise funds for it, including a huge push from the Presque Isle Rotary Club. The center was, and still is, The County’s only dialysis treatment facility.

It opened with nine stations and just three patients but had served 17 before the year was out. The need continued to grow. And over time, the need for a larger facility with new state-of-the-art equipment emerged. The community once again rallied to help make this happen with the new space opening in 2016 with 12 stations serving 69 patients. Over the last five years, additional stations have been added to meet increased needs for this service.

“The community supported our relocation, and they funded our recent expansion. From the very beginning, it’s been a community effort. It’s been a labor of love for so many people over the years. The dialysis center wouldn’t be here today without the community’s support,” said Aron Chalou, RN, manager of Northern Light Dialysis.

Dialysis patients aren’t the only ones who’ve benefited from the generosity of their friends and neighbors. Donations have always played a part in ensuring high quality healthcare is available in Aroostook County.

One particular fundraiser, begun in 1958, continues to improve The County’s healthcare to this day. The Presque Isle Rotary Club set out in that year with an extraordinary commitment to raise $1 million to establish an endowment for the hospital. They created a “Gold Brick Program” to reach their goal.

The Rotary Club made a major push to complete their pledge during their Radio/TV Auction in 2008, 50 years from the date of the initial pledge. They surpassed the original goal of $1 million. That amount pledged in 1958 would be the equivalent of about $9.5 million in 2021 dollars.

“The Gold Brick program has had a long history over multiple generations within our club,” says long-time Rotarian Ray Hews, who served as chairman of the Gold Brick Committee for over 20 years. “This was an incredible fundraising effort that allowed our club to embody our motto of Service Above Self while helping to raise funds for much needed healthcare equipment.  It was a monumental effort by so many Presque Isle Rotarians over five decades and has had an incredible impact on our community.”

The donations given over those decades continue to make a big impact at Northern Light AR Gould Hospital.

“The endowment has delivered incredible benefit to the County,” said Greg LaFrancois, president of Northern Light AR Gould Hospital. “We’ve kept care close to home by acquiring state-of-the-art equipment. We care for the County in the County because of the generosity of so many incredible supporters. Their gifts remain intact, and it is the earnings on those gifts that funds today’s purchases.”

The hospital’s 3D mammography machine, the first one in Aroostook County, was purchased with endowment earnings in 2017. This technology is up to 40 percent more accurate in detecting invasive breast cancers than traditional mammography.

“The 3D mammograms provide better imaging and improvement in the ability to detect early breast cancer,” said Alan Mautz, MD, radiologist at the hospital. “With 3D technology, the patient knows sooner if there is a problem, and just as importantly, sooner if there is no problem.”

Digital fluoroscopy, a form of X-ray that allows deep views into the body in real-time, was made possible by the endowment as well in 2018. Doctors perform a variety of diagnostic and interventional procedures with this equipment.

The endowment also allowed the hospital to add stereotactic body radiation therapy to its treatment options for cancer patients earlier this year. SBRT provides intense doses of radiation to cancer cells, which has many benefits over traditional radiation therapy.

“With SBRT, we now have the ability for pinpoint accuracy and can provide greater effective doses of radiation with fewer treatments and less damage to surrounding tissues,” said Charles Hechtman, PhD, MD, radiation oncologist at the hospital.

Combined, 3D mammography, digital fluoroscopy, and SBRT, cost much more than the $1 million originally raised for the endowment. However, only earnings from the endowment are spent so the principal continues to provide for the people of Aroostook County now and into the future.

“We are so grateful to all the individuals, families, businesses that contributed to the endowment through the years and to the Rotary Club for its foresight, leadership and hard work to make the endowment a reality,” LaFrancois said. “Patients benefit every day because of it.”

For more information on contributing to the endowment, please contact Hollie Wolverton at hwolverton@northernlight.org.

Members of the Houlton Band of Maliseets will head to the ballot box in order to determine who will be elected as their new tribal chief.
Pets END_OF_DOCUMENT_TOKEN_TO_BE_REPLACED