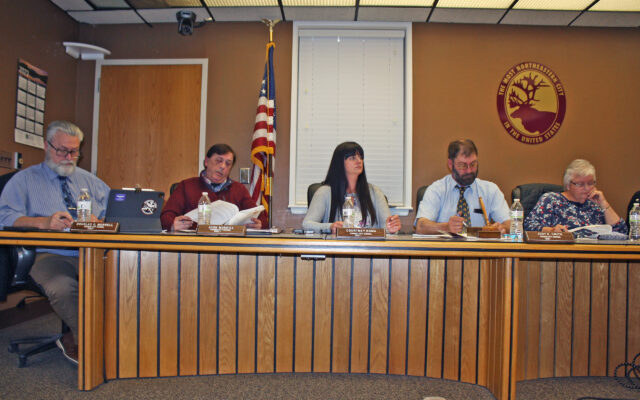 This spring marks the third time that Caribou has awarded grants as part of its facade improvement program. To qualify, businesses must be located in one of the city’s Tax Increment Financing Districts and state their plans for either small signage upgrades or major facade improvements.

Larger grants, like that given to Creative Carpentry, are intended for major facade improvements, which could include exterior siding repairs, painting, window and door replacement and sign enhancement. Smaller grants are geared toward less costly sign or fencing upgrades.

Five businesses applied for the spring 2022 funding cycle while 10 applied last spring. One of the five businesses was deemed ineligible due to its location outside the TIF districts.

Councilor John Morrill, who served on the facade grant committee, said he was excited to see many young entrepreneurs submit applications this year.

“They all had really good ideas and I hope that this little bit [of funding] helps,” Morrill said.

The newest business, Ruska Coffee Co., has not opened but the owner, Tamara Lovewell, is renovating the former Buzzell’s store at 98 Sweden St.

All businesses have one year to complete their facade projects, after which they will receive a 50 percent reimbursement from the city.

With the recent success of the facade program, Murchison said that the committee hopes to open a second round of applications this fall.

In other business, the council scheduled two public hearings for April 25 and another for May 9.

On April 25, the council will hold a hearing to gauge public support for American Rescue Plan Act funds that would award $150,000 to Caribou Fire and Ambulance. The funds would help the department purchase a new chest compression system and video laryngoscope and repair the fire station’s heating, ventilation and sprinkler systems.

Caribou submitted a letter of intent for ARPA funds to the County of Aroostook earlier this year and recently was invited to submit an application. If awarded, the ARPA funds will be added to the city’s capital budget for the project.

“If you want to try to leverage funds we have [at the city] with more funds from the county for much needed improvements, please come out and show your support,” Thompson said.

On that same evening, councilors will hold a hearing for a proposed conflict-of-interest policy to be compliant with the U.S. Department of the Treasury’s ARPA guidelines. The policy would not allow Caribou employees and councilors or their family members, spouses or partners to participate in the ARPA fund selection process.

On May 9, the council will seek public feedback on possibly adding Juneteenth to the city’s list of observed holidays. If approved, the city would close its offices on June 19 or another designated day if Juneteenth occurs on the weekend. This year Juneteenth falls on Sunday, June 19, and will be observed by the state on June 20.

Maine Gov. Janet Mills enacted Juneteenth as a state holiday in June 2021, a week before President Joe Biden did so at the federal level. Juneteenth, a combination of “June” and “nineteenth,” is intended to honor June 19, 1865. On that day, African American slaves in Galveston, Texas, learned that President Abraham Lincoln had signed the Emancipation Proclamation two years earlier.

Thompson said that the police and fire unions that the city’s first responders are part of already incorporate Juneteenth into their contracts.

As part of the potential administration ordinance changes for Juneteenth, councilors might also decide to change Columbus Day to Indigenous Peoples Day to align with how the state observes the second Monday in October.

After comments from Councilor Doug Morrell, Thompson confirmed that the city is not legally required to change the holiday’s name on its calender.

“Maine now observes [Indigenous Peoples Day], so I thought I would include that, since we are reintroducing this ordinance,” Thompson said.

Caribou will become the second group of public officials in Aroostook to vote on Juneteenth. In January, the Houlton Town Council voted against making Juneteenth a town holiday, citing the cost of adding another paid holiday for employees.

The next Caribou City Council meeting will be held at 6 p.m. Monday, April 25. in the council chambers, located in the Caribou Municipal Building, 25 High St.

Next year's Caribou City Council will include a new member and a longtime councilor thanks to Tuesday's election.
Pets END_OF_DOCUMENT_TOKEN_TO_BE_REPLACED

Happy fall to you all.  It has been a super beautiful one so far. The harvest has gone well and the temperatures have remained warm, so enjoy these rare days because before long we will be into the winter months, and we all know what that means.
What's Happening This Week END_OF_DOCUMENT_TOKEN_TO_BE_REPLACED