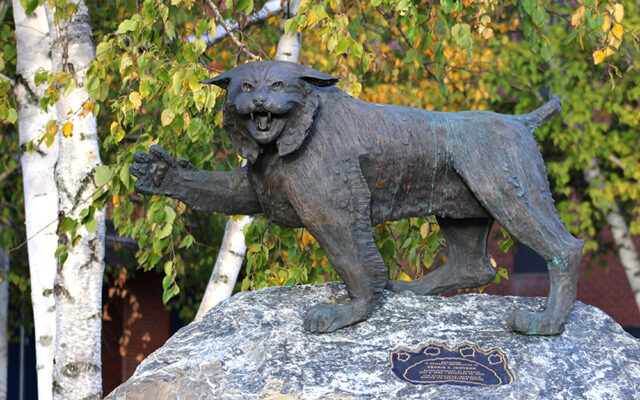 Breanna Sharon Wasson is ranked first. The daughter of Kevin and Beth Wasson of Castle Hill, she has taken the most demanding classes offered at PIHS, earning high honor status every grading quarter. During her high school career she earned the academic letter, Lamp of Learning, Honor Bar and the coveted PIHS Honor Ring.

Wasson participated in the University of Maine at Presque Isle’s concurrent enrollment college course opportunities, earning many college credits.  Along with top academics, she has consistently been involved in various school and community activities.

A genuine scholar/athlete, she has served as president of the National Honor Society, president of the student council, Aroostook League Scholar Athlete, All-Aroostook Nordic Skier, and has earned the four-year Varsity Letter.

Throughout all these undertakings, she has demonstrated true leadership qualities.  She found time to give back to her community through volunteer work in tutoring and teaching younger children. She has also spent many hours helping Dr. Sebold’s local Cemetery Mapping project.

Wasson will be attending Colby College in the fall majoring in environmental policy.

Faith Elizabeth Sjoberg was ranked second. The daughter of Kevin and Susan Sjoberg of Presque Isle, she has taken multiple honors and advanced placement courses, as well as concurrent enrollment offerings through UMPI, earning college credits.  Faith earned the Academic Letter, Lamp of Learning, Honor Bar, and the Honor Ring.

Sjoberg has shown herself to be an extremely well-rounded student who contributes to her school and community. She has been a member of the Outdoor Club, Varsity Club, and has held officer positions for the class cabinet all four high school years, and has been an active participant in the National Honor Society (NHS), serving as treasurer.

She received the Society of Women Engineers Award, the Springfield College Book Award and the President’s Education Award.  An athlete with a strong passion for basketball, she has been an integral member of the varsity basketball team throughout her high school career.  She was honored with the prestigious Maine Sports Legend award this spring.

She volunteers in the community, helping out at her church, facilitating “Games with Faith” which she founded, and volunteering at the United Way Book Nook.  Her favorite quote is, “It’s better to limp in the right direction than to run in the wrong direction.”

Sjoberg will attend Husson University in the fall, majoring in physical therapy.

Jonah Martin Roy, son of Kendall and Rachelle Roy of Presque Isle, graduated third in the Class of 2022. His hard work earned him the academic letter, Lamp of Learning, Honor Bar and the PIHS Honor Ring.

Roy captained the varsity soccer tea and the hockey team, and was an active participant in track and field sports.  He was a four-year member of the varsity club. A member of the National Honor Society, he opted to take Presque Isle High School’s most challenging classes along with many concurrent college classes.

Outside of school, he volunteered with Catholic Charities and with Thanksgiving meal distributions. Along with all his activities and academics, Jonah also worked seasonally at Staples Farms as a farm hand all four years throughout high school career.

Roy is a recipient of the prestigious Pulp & Paper Scholarship and will attend the University of Maine at Orono this fall, majoring in chemical engineering.

Ranked fourth is Landon Knight Thompson, son of Bryan and Melissa Thompson of Caribou. He has been a successful student and athlete and was involved in the school community through sports and academics.

In sports, he was a recipient of the varsity letter in tennis all four high school years. He also qualified for the All Aroostook Tennis Doubles and Singles. Academically he has been awarded the Honor Ring, Lamp of Learning, Honor Bar and received high honors throughout each high school quarter.

Aside from his sports and academics, Thompson works for the Elevation Tennis Academy. He has volunteered as a Special Olympics soccer and basketball coach for the Aroostook Grasshoppers and the Snow Dogs, and for the United Way “Book Nook.”

He enjoys tennis, hiking, travel and spending time with family and friends. He lives by this motto: “If you see a friend without a smile, give him one of yours.”

He will attend Liberty University in Virginia this fall, majoring in business administration with an emphasis in financial planning.

Jonathon Andrew Grotton, son of Michael Allen and Charlotte Ann Grotton of Presque Isle, achieved fifth place. Dedicated to his academics, he has maintained honors and high honors throughout his high school career and achieved the 2019 and 2021 Presidential Award for Academics.

He received the Academic Letter, Lamp of Learning and Honor Bar.

A musician and thespian at heart, he was actively involved all four high school years in the PIHS school musical productions. He served three years as an active cast/crew member of the one-act play competitions, a two year member of the All Aroostook Chorus, and one year participant for the All State Chorus.

He volunteered at the Raven Food Pantry and worked at the concession stand for the PIHS basketball games.

A hard worker who enjoys reading and math, Grotton will attend Husson University in the fall, pursuing a master of business administration degree with an emphasis in accounting.

Most of us have had just about enough of hearing about COVID-19 and the different variants that are popping up, but unfortunately, this pesky virus is still around.  It’s important to know a few warning signs and tips if you think you or your furry family members are affected with this illness.
What's Happening This Week END_OF_DOCUMENT_TOKEN_TO_BE_REPLACED