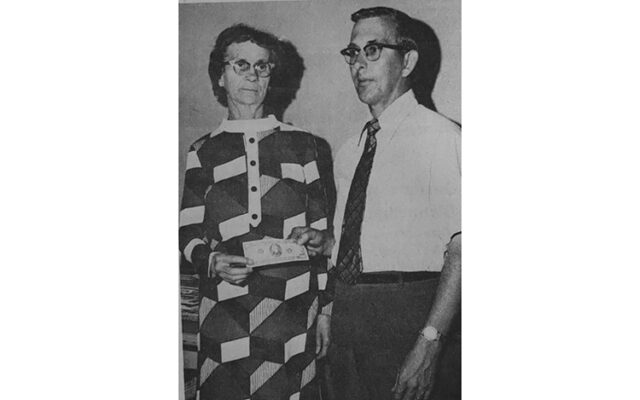 Contributed • July 20, 2022
115 Years ago, July 23, 1907 Crowded house – The minstrel benefit for the Baseball Association had a crowded house last night, and the entertainment reflects great credit upon every member, who have developed wonderfully under the supervision of Director S.H. Hanson, who has had many things to contend with, and many difficulties to overcome.

Crowded house – The minstrel benefit for the Baseball Association had a crowded house last night, and the entertainment reflects great credit upon every member, who have developed wonderfully under the supervision of Director S.H. Hanson, who has had many things to contend with, and many difficulties to overcome.

The songs were bright and catchy and the jokes were all good. There will doubtless be a good house tonight, when the second performance will be given.

Two teams knotted for top in middle league – Thursday the Serpents defeated the Northern Sluggers, 16 to 2, and Friday the Fair Street Boomerangs in the Little League broke into the win column by defeating the Longfellow Bears, 14 to 13, in a free-scoring game. Friday afternoon the Junior Collegians scored 13 runs in the last inning to defeat the Raiders, 24 to 9. Monday morning Longfellow defeated Fair Street in the Little, standing Longfellow five wins and Fair Street two. Monday afternoon in the Middle League the Pirates bested the Raiders, 20 to 9, in a postponed game.

Basic training in Texas – Pvt. Bryce S. Weeks, son of Mr. and Mrs. Samuel A. Weeks of Amity, who enlisted in the U.S. Air Force April 7, his 17th birthday, is now stationed at San Antonio, Texas, where he is taking his basic training. Pvt. Weeks has been confined to the base hospital for 28 days with a foot ailment and was released July 3 to resume his basic.

Smyrna youth among delegates to Boys Nation – Michael G. Sawyer, son of Mr. and Mrs. George Sawyer of Smyrna Mills, has joined a group of 100 of the nation’s top youths in Washington, D.C., for a series of activities in connection with the 27th annual Boys Nation program of the American Legion. The young “Senators” have undertaken a weeklong exercise in high level government operations designed to provide an insight into the workings of the three branches of the Federal government. A senior at Lee Academy, Michael earned his trip to Washington as an outstanding graduate of the 1972 Dirigo Boys State program of the American Legion at the University of Maine at Orono in June. Through the process of “Federalist” and “Nationalist” party mock conventions he will participate in the nomination of candidates and the ultimate election of a 1972 boys Nation president and vice president.

Oakfield youth jets to Miami for convention –  Kilburn Swallow of Oakfield was one of five students who attended the Democratic National Convention in Miami. He accompanied Gov. Kenneth Curtis and Senator Edmund Muskie and the other members of the Maine delegation on a jet from Augusta. Kilburn is a student at Bowdoin College in the Upward Bound Project that is designed to interest youngsters from low income families in the advantage of post high school education. He attended the platform committee on Tuesday and the nominating session on Wednesday.

Forbidden foods for our four-legged friends are many and can be very dangerous if ingested. Sometimes, we give our pets leftovers or what we consider treats. According to many sources, some human foods can make an animal very sick, and in certain cases can even be lethal.
What's Happening This Week END_OF_DOCUMENT_TOKEN_TO_BE_REPLACED