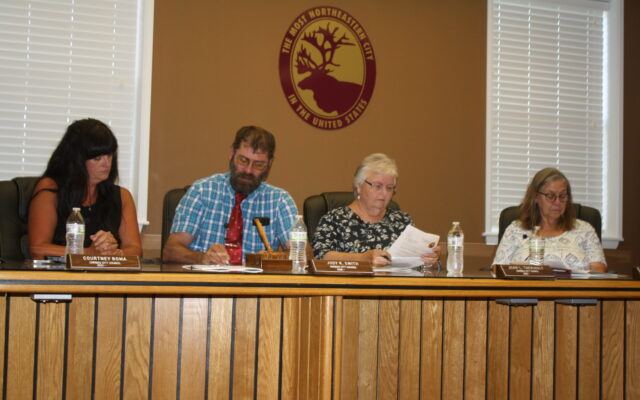 This will be the third year that Caribou taxpayers will see that mill rate and the second year that councilors opted to keep it flat. But City Manager Penny Thompson noted that many property tax bills will still increase because of recent sales that have been higher than the properties’ assessed values.

Due to the higher valuations, the Maine Revenue Service will only allow Caribou to certify property taxes at 95 percent rather than the full 100 percent, Thompson said. That means even property owners who receive Homestead and/or Veterans Exemptions will not see significant reductions in their tax bills.

At the same time, the increased property valuations have helped to keep the tax rate stable for this year, Thompson said.

That is good news for taxpayers, given the originally projected 26.14 mill rate in March, which would have been an 11 percent increase over last year’s rate.

The council’s disagreement over this year’s tax rate stemmed from debate over how to use a $194,790 tax relief fund balance set aside from money that RSU 39 returned to the municipality when the state increased funding for public education.

Last year the council voted 4-3 to put the extra funds toward city projects rather than lower the mill rate.

But since that money has not yet been used for any projects, Councilor Doug Morrell argued on Monday that the city should use the funds to lower the proposed mill rate.

Thompson told councilors that, if they chose that route, they would lower the tax rate by half a mill.

The majority of councilors voted to uphold the proposed 23.55 mill rate, with a $1,572 overlay. Morrell and councilors Mark Goughan and John Morrill voted against that tax rate, in hopes of lowering it by the proposed half mill.

Councilors also voted 6-1 to commit taxes on Aug. 5, set the property tax due date as Aug. 24, name Oct. 1 as the date when interest begins on delinquent taxes, set the rate of interest for delinquent taxes as 4 percent and allow city offices to close at 1 p.m. Dec. 30 so staff can finish year-end business prior to the new year.

Morrill thanked the city’s department officials for doing their part to lower their budgets and keep the overall tax rate stable.

“We’ve asked you to cut, cut and cut and I’m sure some of those cuts might hurt more,” Morrill said. “But I want to commend them for what they’ve done.”

In other business, councilors voted 6-1 to meet Tuesday, Sept. 13, instead of Monday, Sept. 12. Typically the council meets on the second and fourth Mondays, but Thompson requested the change so she can attend the Cary Medical Center Board of Directors meeting on Sept. 12.

Her request came one week after Morrell expressed disapproval of a proposed ordinance, which he interpreted as a response to his request for financial information from Cary’s board.

“The [city’s] charter actually states that the manager should take part in [the Cary] meetings, so I feel I should be there to give the council updates,” Thompson said.

The city council’s next regular meeting will occur at 6 p.m. Monday, Aug. 22, in the council chambers, located in the Caribou Municipal Building at 25 High St.

Every cat that passes through our doors has a story, some happy, some sad. In this article we want to share Bluebell’s story with you. Bluebell came in as a very pregnant stray. She had been living under someone’s porch.
What's Happening This Week END_OF_DOCUMENT_TOKEN_TO_BE_REPLACED