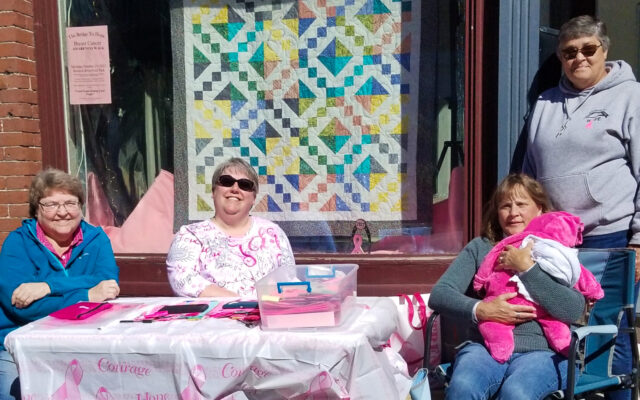 Joseph Cyr • October 10, 2022
For nearly two decades, a local non-profit group in southern Aroostook County has done its part to aid families whose loved ones are battling cancer.

HOULTON, Maine — For nearly two decades, a local non-profit group in southern Aroostook County has done its part to aid families whose loved ones are battling cancer.

Sometimes it is something as simple as a gift card for gasoline to help with travel expenses. Other times it is a small bouquet of flowers or a card to hopefully brighten a person’s day when going through the rigors of treatment.

Whatever the need, the Bridge to Hope cancer group has tried to go above and beyond to help local people during some of their darkest moments and has no plans to stop any time soon.

The group will hold its 17th annual fundraising walk Saturday, Oct. 15, at Houlton’s Riverfront Park starting at 9 a.m. with registrations, and the walk commencing at 10 a.m.

Traditionally held at the Gentle Memorial Building with a large, indoor ceremony, the group moved the walk outdoors last year because of COVID-19 and has since decided to continue that new tradition.

New this year, the walk will be conducted along the Riverfront Park hiking trail, with people able to walk as much, or as little, as they wish.

In 2020, the walk could  not be held because of COVID-19. Instead, a “Cruisin for Cancer” ride was held in its place, and while some were disappointed not to be walking, their generosity was ever present as $16,050 was collected.

“I think our first year we helped two people with $50 gift cards,” explained Dee Butler Henderson, one of the organizers of the group. “We were so happy with just that. Now, I can’t even keep track of how many people we try to help.”

The mission of Bridge to Hope is to help people in southern Aroostook County with financial burdens as they battle cancer. The organization has helped hundreds of families over the years, with such kind gestures as gasoline gift cards for those traveling to chemotherapy appointments or hotel accommodations for those seeking treatments or surgical procedures in places such as Portland or Boston.

By keeping funds local, the group has been able to help people undergoing cancer treatments with various expenses as well as providing them meal gift cards, gift baskets and even donations of turkeys during Thanksgiving and Christmas.

If funds are available, the group also offers a small scholarship to any student who lives in southern Aroostook County who has been affected by cancer in one way or another. Bridge to Hope also supports Sarah’s House in Holden, which provides temporary lodging and support to those receiving treatment at the Eastern Maine Medical Center Cancer Care facility.

But with rising costs in gasoline, a $50 gift card does not go as far as it once did. To combat the high gas prices, the group awarded $300 gas cards.

“We figured out that because of the higher gas prices we were able to give out just 83 gift cards last year,” Butler-Henderson said. “Eighty-three gas cards for a year is not much. We have many, many requests each week and more and more folks who can’t get to their appointments. We try to help as best we can.”

While the walk is typically the group’s largest fundraiser, the group is seeing more and more people make memorial donations after a loved one dies, which enables the group to keep up with rising expenses.

“Those (memorial) donations are a huge plus and we greatly appreciate those who do that,” Butler-Henderson said. “We are trying to honor as many repeat requests for aid as possible.”

To date, the group has raised more than $175,000 over its 17-year history. Donations will be accepted and those wishing to obtain sponsor sheets can contact Kim Folsom at info@hphac.com or call 207-538-6973.

Next year's Caribou City Council will include a new member and a longtime councilor thanks to Tuesday's election.
Pets END_OF_DOCUMENT_TOKEN_TO_BE_REPLACED

Everyone who enjoys the company of a dog knows that sometimes dogs have strange behaviors.  They may arrive in your life with the behaviors already in place, or perhaps they are adopted as a puppy and develop a behavior young.
What's Happening This Week END_OF_DOCUMENT_TOKEN_TO_BE_REPLACED