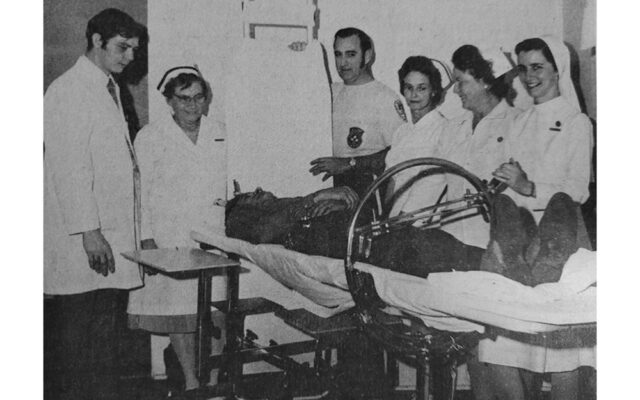 Contributed • November 10, 2022
75 Years Ago - Nov. 6, 1947 Local Students Contest Winners — Two members of the senior class of Houlton High School were among six students chosen as winners at the first judging of the essay contest, “One World Through United Nations.” Principal Milton B. Lambert received word Wednesday that Ann Hannen and Wendell Peabody were two students chosen from the first district comprising the counties of Aroostook, Hancock, Penobscot, Piscataquis, Waldo and Washington.

Local Students Contest Winners — Two members of the senior class of Houlton High School were among six students chosen as winners at the first judging of the essay contest, “One World Through United Nations.” Principal Milton B. Lambert received word Wednesday that Ann Hannen and Wendell Peabody were two students chosen from the first district comprising the counties of Aroostook, Hancock, Penobscot, Piscataquis, Waldo and Washington.

These students will compete in the semifinal contest at Brewer Methodist Church Sunday evening. From the six delivering their essays at this time, two will be chosen to read them over radio station WLBZ Nov. 22. Both essays will be submitted in competition with other essays from the state for the final prize, a trip to New York City and Lake Success with all expenses paid.

Modern hospital — Aroostook Hospital has new modern machines. It has been announced by Miss Helen Turney, superintendent, that the Aroostook General Hospital has just received delivery of the most modern basic metabolism and electrocardiogram machines. Being aware of the latest trend in up-to-date hospitals, Miss Turney states that the new Board of Trustees of the hospital is establishing in the hospital an out-patients’ room where the physicians may bring their patients for a complete examination such as heretofore have been received only in the larger city hospitals. The hospital has also purchased an emergency lighting system, which is large enough to take care of all the lighting in the hospital.

BPW will observe 50th anniversary — The Houlton Business and Professional Women’s Club will observe its 50th anniversary with a dinner Tuesday evening at Parkview Terrace. Guest speaker for the evening will be Mrs. Minnette H. Cummings of Newport, a two-term member of the Maine Legislature and a candidate for the State Senate in yesterday’s general election. Slated for special recognition during the evening is Mrs. Fern French, the only charter member of the Houlton BPW who is still living.  The Business and Professional Women’s Club was organized in Houlton in the fall of 1922 after 23 women gathered at the former high school building to discuss formation of the club with Miss Abbie C. Dennett of Portland, chairman of the organization committee for the State Federation of BPW clubs.

Miss Millar Is Named Chaplain At Older Girls — Miss Mary Ann Millar, a Houlton High School junior, was elected chaplain of the 1973 Maine State YMCA Older Girls Conference in Waterville. Miss Millar was among the 19 delegates in attendance at the conference from the Houlton area. The delegation representing the Northeast District YMCA and Aroostook County was the largest in attendance with representation from Houlton, Littleton, Monticello, Fort Fairfield and Presque Isle. Miss Millar will be responsible for working with the other officers from across the state in developing the theme and program for the 1973 conference.

Local man retires from Air Force — Maynard Gardiner, a 1977 graduate of Katahdin High School in Sherman Station, retired from the Air Force on Oct. 1. Gardiner, son of Maynard and Nora Gardiner of Stacyville, entered the service right out of high school. After basic training at Lackland Air Force Base, Texas, he studied electronic warfare systems at Keesler Air Force Base in Mississippi. From Keesler, he was assigned to Luke Air Force Base in Arizona, then on to Korea. He was at Cannon Air Force Base Porales, New Mexico, when he retired. He met and married his wife, Ellen, in the service 18 years ago.

Town receives award — Shiretowners have another reason to be proud of the community in which they live. The town of Houlton recently became the first town government in the state of Maine to ever receive a Margaret Chase Smith Maine State Quality award. The award, named after the late senator, acknowledges organizations who promote excellence in business practice. There are three award categories – Level I (Commitment), Level II (Progress) and Level III (World Class Excellence). There were no Level III winners this year, however, Houlton was one of nine Level I winners. Town Manager Allan Bean is pleased that Houlton was the first town government in the state to receive such an acknowledgement. “Houlton is at the beginning of I-95 and we’re honored to be the beginning of quality in town government statewide, as well,” said Bean.

Next year's Caribou City Council will include a new member and a longtime councilor thanks to Tuesday's election.
Pets END_OF_DOCUMENT_TOKEN_TO_BE_REPLACED

What a beautiful fall we are having.  We hope you and your furry friends have been able to go on long walks enjoying all these “bonus days.” Even though the pandemic has put an unexpected cramp in most of our lives, we are all starting to get a glimpse of our past “normal” life reappearing.  There will definitely be the usual ghosts, goblins and superheroes out on the prowl on Halloween night.
What's Happening This Week END_OF_DOCUMENT_TOKEN_TO_BE_REPLACED