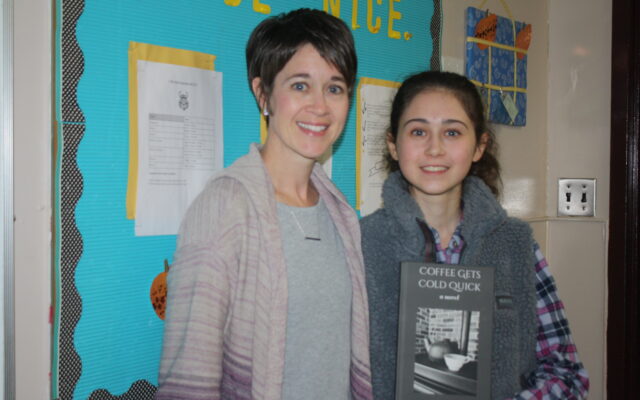 Melissa Lizotte • November 15, 2022
Like many young writers, 14-year-old Maggie Bell of Caribou has always loved seeing her words in print.

CARIBOU, Maine – Like many young writers, 14-year-old Maggie Bell of Caribou has always loved seeing her words in print.

But she could never have predicted that her first novel would be in local libraries and bookstores as she entered high school.

In July, Bell published “Coffee Gets Cold Quickly,” a 104-page novel written in poetic verse that tells the fictional story of Emma Clark. The novel spans from 1903 to 1919 and follows Clark as her family moves from Missouri to Colorado on the Pacific Transcontinental Railroad. When Clark is 13, her mother passes away and she must make her own way in the world.

“When I wrote the first poem, I wasn’t thinking that it would be a book. But [Clark’s] voice made me happy and as I got deeper into the character and did more research, things fell into place,” Maggie said, on the book’s origins. 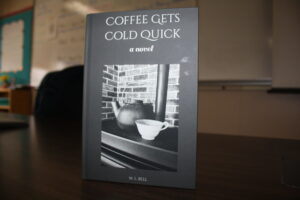 Maggie was in eighth grade when she began writing more poems in Clark’s voice and continued throughout that school year. She is now a freshman at Caribou High School.

In eighth grade, Maggie had not yet studied the Transcontinental Railroad but came to that time period after deciding that Clark’s story should be set later than the Civil War, which she was studying in school.

“Emma’s grandfather fought in the Civil War and she talks about how that impacted him,” Maggie said. “But I wanted to include technologies that weren’t invented then and the immigration that happened during World War I.”

Maggie’s commitment to writing and creating an authentic story comes as no surprise to her mother, CHS English teacher Jessica Bell.

From second grade onward, Maggie has been a “voracious” reader and an avid writer of poetry and stories. After seeing her work published in the anthology of Young Authors Institute, which showcases the writings of 4th to-8th-grade students in Aroostook County, Maggie became even more inspired to write.

Though Jessica did not read Maggie’s full novel until she had finished, she knew of the project early on and always offered support.

“She’s very independent and usually doesn’t show me something until the end, but early on she showed me a few poems. I told her, ‘You need to follow up on this,'” Jessica said. “It was neat to see her realize that she was onto something.”

While looking for publishing avenues, the mother and daughter chose a self-publishing option through Kindle that allowed Maggie to maintain creative control. So far the pair have distributed Maggie’s books at the Caribou and Presque Isle public libraries and at Bogan Books in Fort Kent, Neighborhood Books in Presque Isle and Brambleberry Market in Caribou. The book is also sold online at Amazon.

The news about Maggie’s book has mostly spread through word-of-mouth, Jessica said, which has made the positive feedback even more rewarding.

“I was standing in line to vote [on Election Day] and the people next to me said, ‘We read Maggie’s book and loved it,'” Jessica said. “She has gotten good feedback.”

Maggie is not sure when she’ll pursue her next book but already has advice for young writers like herself.

“Stick with it and don’t let anything stop you,” Maggie said. “The world will always need more stories. Your story will be special because you’re the one telling it.”

Next year's Caribou City Council will include a new member and a longtime councilor thanks to Tuesday's election.
Pets END_OF_DOCUMENT_TOKEN_TO_BE_REPLACED

What a beautiful fall we are having.  We hope you and your furry friends have been able to go on long walks enjoying all these “bonus days.” Even though the pandemic has put an unexpected cramp in most of our lives, we are all starting to get a glimpse of our past “normal” life reappearing.  There will definitely be the usual ghosts, goblins and superheroes out on the prowl on Halloween night.
What's Happening This Week END_OF_DOCUMENT_TOKEN_TO_BE_REPLACED