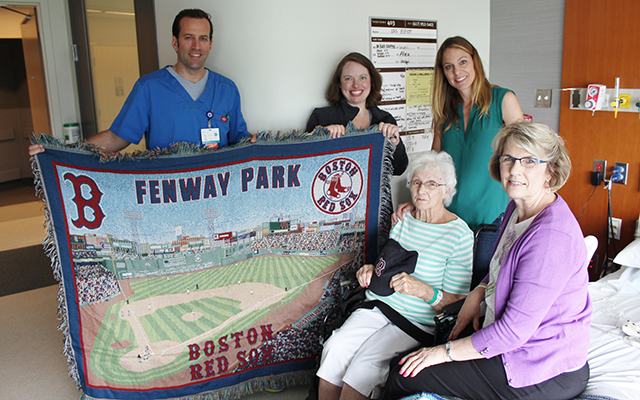 Karen Donato, Special to The County • June 27, 2017
Who knew a few months ago when my daughter Jill Meuse planned a surprise birthday gift for her grandmother, Lois Eleiott of Littleton, that it would include some dirt from Fenway Park in Boston.

BOSTON, Massachusetts — Who knew a few months ago when my daughter Jill Meuse planned a surprise birthday gift for her grandmother, Lois Eleiott of Littleton, that it would include some dirt from Fenway Park in Boston.

My mother was turning 94 at the end of May and as a surprise Jill secured tickets for the Red Sox vs. Mariners game on May 28. She had even arranged to have her name with a birthday wish on one of the big screens at Fenway during the game. 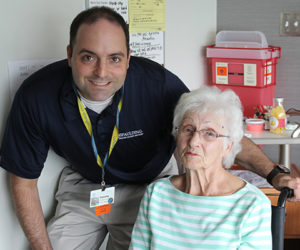 Tim Sullivan, left, director of communications at Spaulding Rehabilitation Hospital in Boston poses with Lois Eleiott and her gifts from the Boston Red Sox. (contributed photo)

My mom and I left Houlton after I was done work at school on Friday, May 26, and arrived at my daughter’s in New Hampshire early in the evening. Just 15 minutes after arriving, Mom began showing signs of a stroke. Her speech was garbled and she was confused. Immediately we called 911. A local ambulance team arrived and transported her to Merrimac Valley Hospital in nearby Haverhill, Massachusetts.

The emergency-room doctor, Marc Simmonds, ordered a C.T. scan and administered the stroke injection, T.P.A. He met with us and recommended a team of doctors at Boston Medical Center that uses the latest procedure for removing clots. So back on the road, we headed into the city of Boston. I was thankful my son-in-law, Jason was driving.  As we entered the Boston Tunnel I received a call from neurologist, Dr. Thanh Nguyen, explaining the risks and clearing the way for them to proceed. Once at the hospital we waited to meet with the team … and little did we know Mom would already be in recovery and the clot was already removed. It was located on the right side of the brain, which affects the left side of the body.

The next morning we noticed she looked only to the right and was very slow at responding, but day by day she has overcome many of those initial weaknesses. The doctors heard the story of how she was supposed to be attending the Red Sox game. They couldn’t believe at 94, she was still mowing her own lawn and driving. She had also had no history of high blood pressure and was taking no medications other than a baby aspirin a day.

After a week of care at Boston Medical, she was transferred to Spaulding Rehabilitation Hospital. This Boston facility is ranked one of the best in the United States. She has had intense therapy for speech and language, physical therapy and occupational therapy. Her days have been busy along with group sessions and support groups. 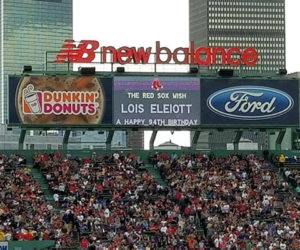 A birthday wish for Lois Eleiott of Littleton appeared on the big screen at Fenway Park, home of the Boston Red Sox, on May 28. (contributed photo)

Her nurses made sure that her television was tuned into any Red Sox games after noticing her Red Sox balloon and framed photo of her name and birthday wish that had been viewed by thousands at Fenway Park during the game she couldn’t attend.

Not long after arriving at this facility, Tim Sullivan, director of communications, visited us in her room to say that he had heard about her love for the baseball team and not being able to attend the game. He had contacted the Red Sox organization and they were very taken with her story. He told us something was in the works. He said that sometimes some of the players visit the patients among other things. The surprise arrived on Friday, June 16. Mom was presented with a gift basket which included: a Fenway Park blanket, an insulated coffee mug, a baseball cap with a red sequined “B”, photos and program books and a little bag of Fenway dirt.

Upon receiving the dirt, my mom promptly said that she would put it in her garden and if it made a difference in what she had planted she would know why.

Her nurse, David Soprano and case worker, Sarah McDonald who helped with the presentation along with my daughter and I, couldn’t help but laugh.

My mom shared this event with her pastor, Steve Straubel of the Littleton Baptist Church and suggested to him when she gets back to church maybe they could throw a few baseballs around one Sunday. He suggested she wear her new cap and she told him he should wear his.

So in the near future, we hope to sprinkle that dirt in the garden she had planted earlier in the season and see if it has any influence on the yield of vegetables.

So go Red Sox. You have a 94-year-old fan still cheering for you and faithfully watching your games even after having a stroke. Thank you for taking the time to make this fan feel very special.

For the first time since 2019, there is competition for open seats on the Houlton Town Council
Pets END_OF_DOCUMENT_TOKEN_TO_BE_REPLACED

We hope everyone enjoyed a wonderful holiday season and is looking forward to the new year.  December was a busy month at the Central Aroostook Humane Society with so many people and businesses bringing in much-needed supplies and monetary donations, which help us to take care of the special temporary pets in our care.
What's Happening This Week END_OF_DOCUMENT_TOKEN_TO_BE_REPLACED