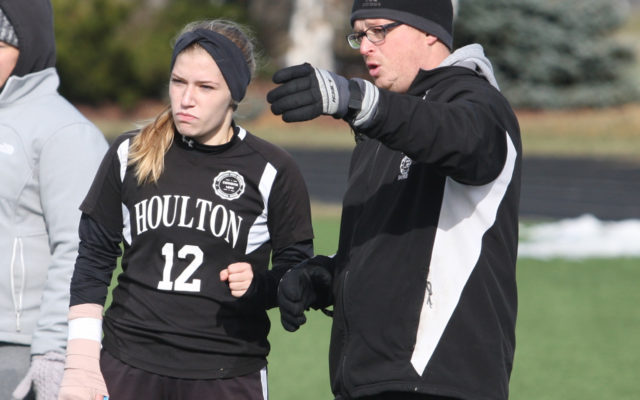 Joseph Cyr • May 17, 2019
Houlton girls varsity soccer coach Tim Tweedie has decided the time is right for him to hang up his coaching whistle -- at least for now.

HOULTON, Maine — Houlton girls varsity soccer coach Tim Tweedie has decided the time is right for him to hang up his coaching whistle — at least for now.

The veteran coach announced his decision to his team on Wednesday, May 15, on the group’s  Facebook page.

“Knowing that this day would eventually come does not make this any easier,” Tweedie said. “It is with some sorrow, but also lots of pride and confidence that I am choosing to hang up the whistle.”

The Houlton girls soccer program has been one of the elite squads in its division due largely to the effort put forth by Tweedie and his assistant coaches. He coached the girls soccer program for the past 14 years, and has had his program in playoff contention for many of those seasons. Houlton finished on top of the Class C division in 2017, winning the school’s first girls state championship since 1987.

“These types of decisions are always difficult,” he said. “I love working with the kids, but at the same time, I really missed out on a lot of my own childrens’ things. Combined, I made it to five of my oldest two kids’ games last fall and I knew that just wasn’t fair.  I couldn’t justify that to them at their ages (12, 9, and 4).”

Tweedie said it was during a bus trip last fall to an away game in Lincoln, when the realization hit him that he was missing out on his own children’s memories. His wife Erica was sending texts to him, updating him on the results of their children’s game.

“I remember thinking, ‘What am I doing?,’” he said. “Time flies by so quickly and I don’t want to miss watching my kids grow up.  There’s plenty of time for me to coach later on in life.”

Surprisingly, it is the practice sessions and not the games themselves that Tweedie will miss the most.

“I absolutely loved practice time,” he said. “Don’t get me wrong, games are fun…particularly the big ones. But I loved to coach in practice.  That’s when all of the work was done. That is when you could watch players really develop and see the hard work pay off.”

His wife coaches the middle school boys soccer team, so Tweedie said it will be an interesting role reversal as he will be the parent sitting in the stands and not on the bench this fall.

Through all the ups and downs of a sports season, Tweedie said one constant remained.

“Being at the helm of this program for the past 14 years has been one of the absolute greatest pleasures of my life,” Tweedie said. “When I began coaching at the age of 25, I immediately knew that something had been missing in my life. At that time, I was not yet ‘Mr. Tweedie.’ I was a truck broker, living in Mars Hill, yet to have had any children.

“But once I began working with that very first group of girls, I was hooked,” he continued. “I loved working with young people. It was my new passion. I believed this so deeply, that I went back to college and began taking night courses, in order to obtain my teaching certification. Within a year, I had made a career change … all thanks to soccer.”

Tweedie did not rule out returning to coaching at some point in the future.

“I still love to compete and to work with players, but for now, I need to focus on my family and my career,” he said.

Tweedie was named Assistant Principal at Houlton Middle-High School in August 2018, but coached the 2018 season as he had already begun summer soccer. He said the challenge of teaching student athletes the ins and outs of the game of soccer, a sport for which he has a deep passion, was one of the most enjoyable elements of the position.

“Years from now, when I look back at this wonderful time in my life, it won’t be the results that I remember,” he said. “It will be my admiration for the quality individuals that I had the pleasure of working with.”

Only one member of Maine’s congressional delegation had come out in favor of impeaching President Donald Trump ahead of House Speaker Nancy Pelosi’s Tuesday announcement that the Democratic-led House of Representatives would begin an impeachment inquiry.
Pets END_OF_DOCUMENT_TOKEN_TO_BE_REPLACED