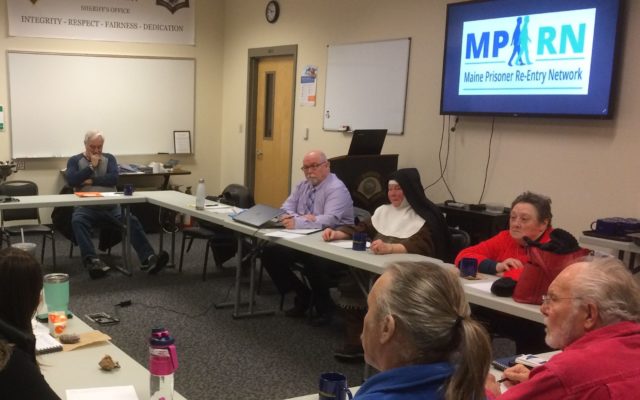 David Marino Jr. • February 21, 2020
The Maine Prisoner Re-Entry Network is expanding to Aroostook County, extending its strong resource network to a part of Maine devastated by incarceration and substance use disorder.

PRESQUE ISLE, Maine — The Maine Prisoner Re-Entry Network is expanding to Aroostook County with a meeting in Presque Isle scheduled for Feb. 26, extending its strong resource network to a part of Maine devastated by incarceration and substance use disorder.

While Aroostook County is more sparse and rural than many of the locations in which the network — which originated in Lewiston-Auburn — operates, it contains a sizable population of those who are formerly incarcerated. That number may be growing, with Maine Department of Public Safety data showing Aroostook County’s crime rate witnessing a higher increase than any other Maine county from 2017 to 2018.

The ultimate goal of the network is to create “re-entry ready communities” in which the formerly incarcerated can have access to the resources they need to succeed, whether that be with career help, substance use or mental health treatment or faith-based guidance.

Along with working as an intermediary between the formerly incarcerated and such resources, it also works directly with prisoners as they strive to get back on their feet. Working closely with the Maine Department of Corrections and case workers, they often meet with current prisoners, crafting a case plan for when they leave.

Re-Entry Network Executive Director Bruce Noddin said the program originated out of work he performed with a Catholic ministry in Androscoggin County Jail in Auburn about five years ago.

Noticing a high recidivism rate among inmates and few resources available for those trying to land back on their feet, he began an operation that has taken him and a group of dedicated volunteers to Augusta, Bangor, Madison, Rockland and Westbrook, among other locations.

Noddin said the organization — which recently received a 501(c)(3) non-profit status — primarily survives off of grants and donations. While it is all-volunteer right now, he hopes to add paid positions in the future.

Noddin said that by building connections with local employers and community leaders, he helps ensure that men and women can re-integrate economically after imprisonment.

“We would really like for people getting out of prison and jail to have an opportunity to have a career,” Noddin said. “Just like the rest of us.”

The network hopes to begin making that dream a reality in Aroostook County with its inaugural meeting at the Aroostook County Action Program on Main Street in Presque Isle, from 1 to 3 p.m. on Feb. 26. The sessions are scheduled to continue in the coming months, on the fourth Wednesday of every month.

He said his interest in Aroostook County came when he noticed many former County residents incarcerated across the state who wished to return to their hometowns. By bringing resources there, he hopes to ensure that the formerly incarcerated never feel that they do not have available resources in the towns and cities where they grew up.

Noddin said there were many barriers for those with criminal records, even before the dreaded employee background check. It can make it challenging to find adequate housing and re-establish relationships with family and friends. He said all of these hurdles go back to a singular cause: stigma.

“Overarching everything is that stigma,” Noddin said. “And it makes it a challenge to just live a normal life that we take for granted.”

He said that the vast majority of the former inmates he had worked with had a previous history with substance use disorder. Describing himself as being in “long-time recovery” himself from previous alcohol and drug use, he said his ability to relate with those with substance use disorder is an integral part of his work. This part of the network’s activity also bodes well fighting recent increases in drug abuse across The County.

Noddin said state reps, mental health professionals, district attorneys, police officers and faith leaders are among those who have attended its meetings in the past. He hoped to see the pattern repeated as he makes trips to Aroostook County in the coming months.

At the Houlton Humane Society, we take adopting the cats and dogs in our charge very seriously.
Campaign Corner END_OF_DOCUMENT_TOKEN_TO_BE_REPLACED