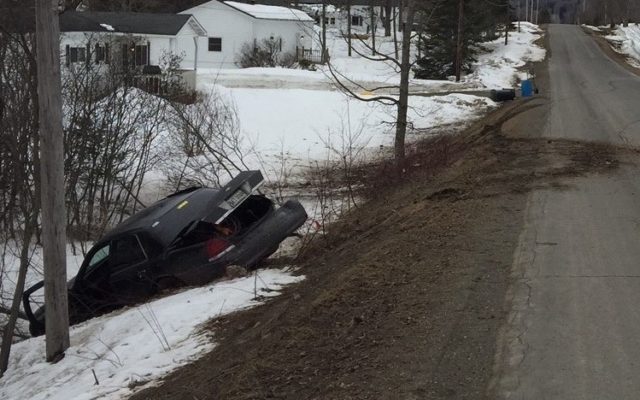 David Marino Jr. • April 1, 2020
The Maine State Police said a Blaine man who lost control of his car while accelerating out of his driveway on Tuesday was summoned for driving with a suspended license.

BLAINE, Maine — The Maine State Police said a Blaine man who lost control of his car while accelerating out of his driveway on Tuesday was summoned for driving with a suspended license.

State police said they received a report around 3:11 p.m. on Tuesday of a crash on E Plantation Road in Blaine.

After arriving at the scene, police determined the crash occurred after Steven Garrison, 24, pulled out of his driveway on E Plantation Road in a 2009 Ford Crown Victoria owned by Tyler Gove of Limestone.

Authorities said that Garrison pulled out and quickly accelerated, causing the car’s tires to spin and the vehicle’s rear to skid “back and forth” multiple times. Garrison lost control of the vehicle, sliding into a ditch on the south side of the roadway and striking a tree before coming to a stop in a stream.

Police said Garrison’s license is suspended and that he was summoned for operating after suspension. His court date is set for June 10 at Presque Isle District Court. He was wearing a seatbelt and police cited speed as a factor in the crash.

Gove’s car was towed from the scene having “significant damage,” police said. Officers did not elaborate on the relationship between Garrison and Gove.

Members of the Houlton Band of Maliseets will head to the ballot box in order to determine who will be elected as their new tribal chief.
Pets END_OF_DOCUMENT_TOKEN_TO_BE_REPLACED