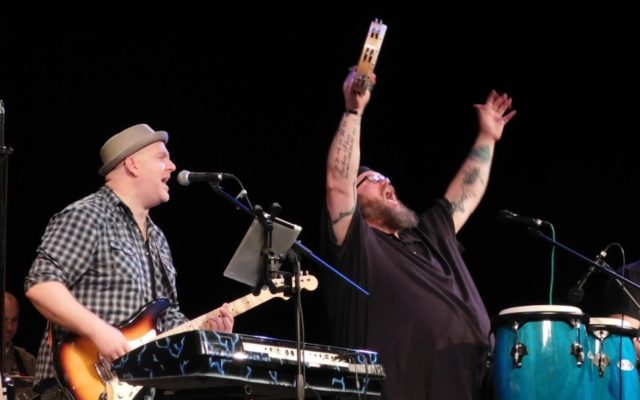 Melissa Lizotte • May 14, 2020
The regular line-up of Rockin’ on Riverside -- every other Thursday from late May to late August -- has been reduced to two concerts due to social distancing requirements.

PRESQUE ISLE, Maine — During an ordinary summer, the Presque Isle Downtown Revitalization Committee would be gearing up for the first concert of the Rockin’ on Riverside series on May 28.

But this year the COVID-19 pandemic has forced the committee to choose an alternative to the Riverside Pavilion: two drive-in concerts to be held on Thursdays — July 9 and Aug. 6 — at the Aroostook Centre Mall parking lot.

The regular line-up of Rockin’ on Riverside — every other Thursday from late May to late August — has been reduced to two concerts due to social distancing requirements. In the current stage of Gov. Janet Mills’ plan to re-open Maine’s economy, gatherings of only 10 people are allowed.

Even with Aroostook County’s economy reopening earlier than urban areas of the state, the limit for public gatherings will remain 50 people throughout most of the summer starting June 1, if the state moves into the third and/or fourth states of the recovery plan.

The Star City Syndicate will perform at the July 9 concert and Wally and the Virginians will perform on Aug. 6, according to Galen Weibley, director of economic and community development for Presque Isle.

In the past, UMPI’s Wieden Auditorium has served as an alternative concert location in case of rain, but this year the two concerts are expected to go on rain or shine.

The Downtown Revitalization Committee is still determining what part of the mall’s parking lot the shows will be held at and how many cars the space can fill. It is also discussing how to possibly livestream the concerts for people who cannot come to the mall.

“We’re going to keep with the social distancing measures by putting one empty parking space in between each car,” Weibley said. “We decided that drive-in concerts would still allow people to watch a live show with their families but maintain distance.”

Both concerts will not include the alcohol and food vendors that are typically present at Riverside performances. But the committee will encourage folks to support local businesses by bringing take-out food with them to enjoy during the shows.

The Presque Isle Police Department also plans to continue its annual Movies in the Park series, but with some changes. Instead of setting up at Riverside Pavilion, they are looking for an alternative location that can better accommodate social distancing.

Currently, the Movies in the Park is expected to begin on Friday, June 12, with a screening of “Frozen 2.”

“They will partition off sections for people to lay down blankets and enjoy the movies from a safe distance,” Weibley said.

Rockin’ on Riverside joins many large-scale events, such as Caribou’s Thursdays on Sweden, the Houlton Agricultural Fair, the Northern Maine Fair in Presque Isle and the Maine Potato Blossom Festival in Fort Fairfield, that have been canceled due to COVID-19.

Nonetheless, Weibley hopes that people will still want to attend the drive-in concerts and use the events as an excuse to have fun outside with the entire family.

“It might be a different atmosphere, but we’re hoping for a good turn-out,” Weibley said. “A lot of community members are looking for a sense of normalcy, so I think these concerts are a good way to lift peoples’ spirits.”

It was a freezing day across The County, but you could hardly tell from the turnout. Even after a massive surge in absentee ballot requests across the Central Aroostook area, droves of people came out to vote in Presque Isle, Mapleton, Washburn and Fort Fairfield.
Pets END_OF_DOCUMENT_TOKEN_TO_BE_REPLACED