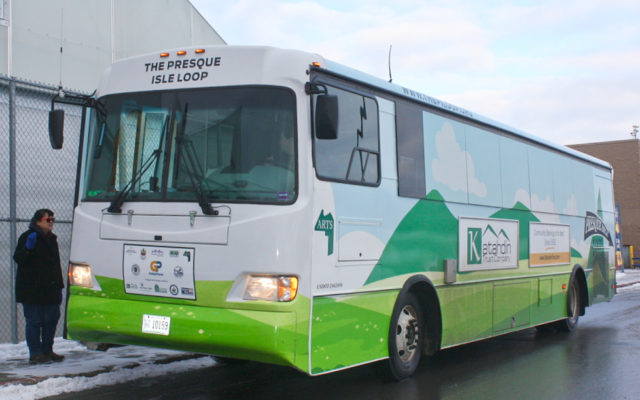 Melissa Lizotte • May 20, 2020
The Going Places Network, a group of community agencies and individuals that oversee Presque Isle’s only fixed public bus route, has announced that Aroostook Regional Transportation System is no longer the route’s owner and operator.

PRESQUE ISLE, Maine — The Aroostook Regional Transportation System is no longer the PI Loop’s owner and operator, the Going Places Network — a group of community agencies and individuals that oversee the city’s only fixed bus route — announced.

ARTS had previously served as owner and operator of the PI Loop since the bus service began on Oct. 15, 2019. Aroostook County Action Program continues serving as the financial sponsor, Jamie Chandler, co-chair of the Going Places Network and ACAP’s chief operating officer, said.

ARTS notified the Going Places committee on April 2 that it was withdrawing from its role due to declining ridership on the PI Loop bus amid the COVID-19 pandemic, according to Chandler.

COVID-19 and declining ridership both played a role in their decision, ARTS executive director David Dionne confirmed Friday. But he also said that ARTS had concerns regarding the “fiscal viability” of the PI Loop project that they continually expressed to the Going Places Network.

“ARTS has been responsible for the overall operation and maintenance of the Loop service. This includes ongoing personnel costs, fuel, insurance, bus maintenance, etc.,” Dionne said. “ARTS has invested its own cash from its current operating budget and from reserves in order to support the service of the new Loop. There has been no other financial support provided to ARTS to operate this service.”

Dionne noted that the continued costs of operating the PI Loop became “too detrimental to the current operations” of ARTS, which also operates five buses and three vans for primarily older and lower-income individuals with transportation needs. They are in the process of returning the two PI Loop buses that were purchased through funds from former Presque Isle resident and philanthropist Mary Smith.

“ARTS never chose to not be the operator/owner. We just can’t sustain the current service model financially,” Dionne said.

The Going Places Network and ARTS, Chandler said, had entered into a memorandum of understanding when ARTS agreed to serve as the PI Loop’s owner and operator. The memorandum outlined a three-phase plan for transferring full financial responsibility to ARTS to sustain the bus loop long-term.

“The plan was to assess the needs of each organization as we came to the end of each phase, with ownership being completely transferred by the third phase,” Chandler said.

The Going Places Network will soon release a request for proposals for bids on new ownership and operation of the PI Loop. An ideal owner for the loop, Chandler said, is one that has experience with public transportation, is a 501-C3 organization and eligible for continual grant funding.

Organizations can send their proposals to the Going Places Network by June 30. After a new owner and operator is chosen, Going Places will work to acquaint them with the bus’s technology, the route’s sponsors and web pages and enter into a new memorandum of understanding. The group hopes to resume bus services this summer.

The most popular pick-up and drop-off stops were Walmart, Carmichael Street near the Presque Isle Housing Authority and Northern Maine Community College.

“We started seeing a real decline once the colleges were closed,” Chandler said.

Even after the PI Loop resumes service, many changes will be made in order to adjust to the ever-present COVID-19 situation. Passengers will have to social distance themselves and drivers might have to incorporate breaks in the route in order to regularly sanitize the interior of the bus.

“Those are all things that we’ll need to take into account as the new owner and operator signs on,” Chandler said.

Members of the Houlton Band of Maliseets will head to the ballot box in order to determine who will be elected as their new tribal chief.
Pets END_OF_DOCUMENT_TOKEN_TO_BE_REPLACED