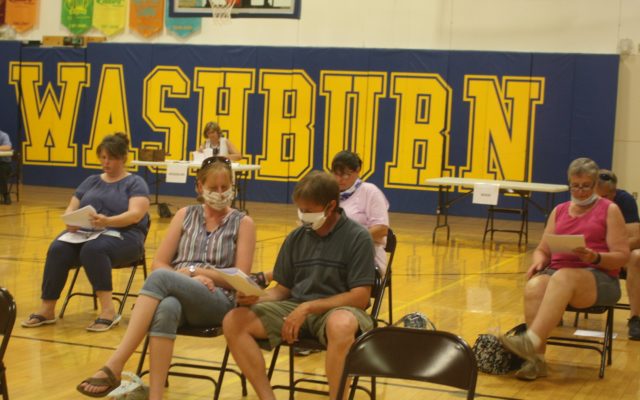 David Marino Jr. • June 23, 2020
SAD 45 residents passed a budget with no new local tax increase but hundreds of thousands of dollars in new spending during the district’s budget meeting on Monday at Washburn Elementary School.

WASHBURN, Maine — SAD 45 residents passed a budget with no new local tax increase but hundreds of thousands of dollars in new spending during the district’s budget meeting on Monday at Washburn Elementary School.

The 2020-2021 SAD 45 budget is $4.6 million, about a $200,000 increase since last year’s budget. The increase came as the district received more than $190,000 in new state aid, primarily the result of a higher special education reimbursement, the district said.

An overflow room was set up in case the gathering went over 50 people — the maximum number currently allowed to meet in Maine under Gov. Janet Mills’ civil state of emergency. That room was not used because 20 people — including school staff and board members — attended. That number included about 10 residents.

Ashland District School Principal Joel Hall — who also moderated the SAD 32 budget meeting on Tuesday, June 9 — moderated a meeting that lasted about 15 minutes. The increase in Perham’s and Wade’s tax burden ended up being the only controversial subject.

Near the start of the meeting, David Heald of Perham criticized the district for saying that the budget had no local tax increases when taxes had increased in Perham and Wade.

The total local contribution of $1.27 million is the same as last year, though there will be different allocations in the three towns in SAD 45 — Washburn, Perham and Wade.

Heald proceeded to vote nay on all of the publicly held votes — only not doing so on the final vote to adjourn. He was the only attendee to dissent from any aspect of the budget publicly.

SAD 45 Superintendent Larry Worcester said he understood where Heald was coming from, but that the increase in taxes for Perham and Wade were because of increased property valuations in the town — a factor he said the district could not control.

Approximately $70,000 more was spent on transportation since last year, $30,000 more on food service and $24,000 more on facilities maintenance. LED lighting projects were funded at the elementary and Washburn District High School buildings.

Although it was not mentioned in the meeting, the effect of COVID-19 on the new school year loomed in the distance for the district. Worcester said his district was hoping to craft a plan for the new year in July, and was soliciting comments from parents in a survey on the district’s Facebook page.

“We’re hoping the survey will shed a little light on what people are thinking,” Worcester said.

Just when we thought we were out of the woods with kitten season, it has hit full force.  The past few days have been difficult answering the phone and hearing the stories of why people have litters of kittens they need to surrender.
Campaign Corner END_OF_DOCUMENT_TOKEN_TO_BE_REPLACED