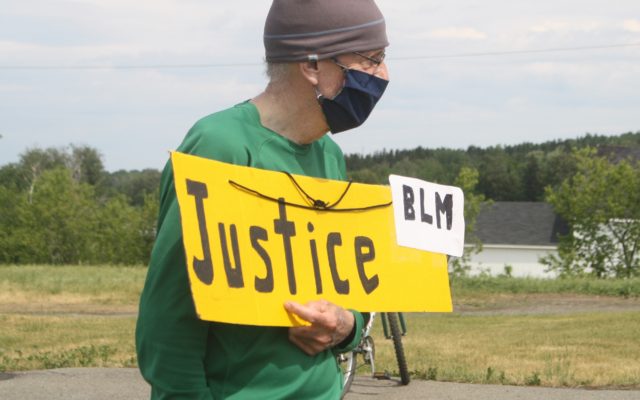 David Marino Jr. • July 1, 2020
Organizer Otis Edgecomb said the recent movement to dismantle monuments dedicated to the Confederate States of America was a vital part of that larger goal.

PRESQUE ISLE, Maine — About 15 people participated in the latest iterations of weekly Black Lives Matter demonstrations across from the Aroostook Centre Mall in Presque Isle on Saturdays, June 20 and 27, as protests in the aftermath of the death of George Floyd continued across the country.

Floyd died in Minneapolis on May 25 after an officer knelt on his neck during an arrest. His death — captured in a widely seen video — spurred a nationwide protest movement against police brutality and racism.

In Presque Isle, several cars drove by and honked in support as protestors waved signs reading “Black Lives Matter,” “systemic racism is real,” and “no justice, no peace.” On June 20, organizer Otis Edgecomb of Fort Fairfield held up a multi-colored peace sign that also featured a raised fist — a symbol of solidarity in activist movements.

While Juneteenth — a holiday celebrating the abolition of slavery in 1865 — had become a rallying call for protests over the weekend of the 20th, Edgecomb said the rally was more about continuing to protest racial inequality across the country.

Edgecomb said the recent movement to dismantle monuments dedicated to the Confederate States of America was a vital part of that larger goal. 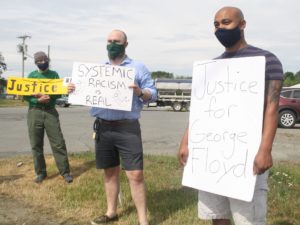 He disputed a belief held by supporters of maintaining those monuments that removing them would be “forgetting history.” He said it was important to remember and learn from history, but keeping the statues up commemorated symbols of racism.

Edgecomb said he was shocked by what he believed to be the increased display of the Confederate battle flag in Aroostook County after Donald Trump became president in 2017.

That flag can occasionally be spotted on T-shirts or hoisted on vehicles in the Presque Isle-area.

“Logically, it [doesn’t] make sense in my head,” Edgecomb said. “We are in Northern Maine. They weren’t even part of the Confederacy.”

Edgecomb said his fight was against police brutality and racism in the United States. He said efforts by activists to “defund the police” had brought some important results, with the Los Angeles City Council on the verge of transferring $133 million from law enforcement to social services.

Yet, he does not want to defund local County police departments. He said that this was a personal opinion and did not necessarily reflect other protesters’ views.

“I can’t say that I’d want to defund them,” Edgecomb said. “Why would I want to take money away when they are doing a good job?”

Claudette Edgecomb — Otis Edgecomb’s mother who joined him at the protest on June 20 — pointed to Fort Fairfield Police Chief Shawn Newell’s leadership as an example for other police departments to follow.

Shawn Newell, who’s openly gay, said police officers across The County did their jobs with high integrity, treating others with respect regardless of status.

“I don’t see color. I see how an individual treats another person, and that’s what matters most to me,” Newell said. “Not where you came from, your ethnic background, religious beliefs or your sexuality.”

Todd Russell, 77, of Presque Isle is far apart from the young demographic many associate with the nationwide protest movement.

Yet, Russell — who attended both protests — said he had supported social justice movements his whole life, including participating in rallies against the Iraq War in Montana with his wife in the early 2000s.

Russell said the historic injustice directed at Black people in America had driven him to broadcast his message to the Presque Isle public.

As passing cars continued to honk in support, Russell said many in the Star City had been receptive to the protestors’ message — a view shared by Edgecomb.

In the middle of the protest on June 27, a man handed out a case of water to the protestors. The man — who declined to be identified — said he appreciated the demonstrators’ devotion to their cause and the peacefulness of the protests.

“I’m sure there’s a lot of people who feel the same, but they have a lot of responsibilities,” Russell said. “It’s not like because they aren’t here they don’t support what we’re doing.”