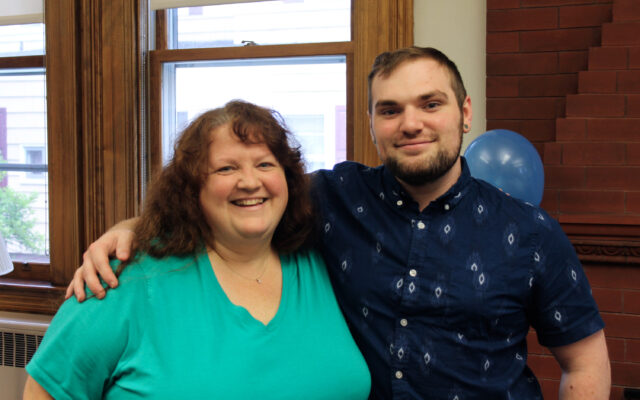 Hannah Catlin • July 18, 2021
Peter Baldwin will become Caribou Library’s new director this August. At 25, he will be the youngest person to ever hold the position, and the first man.

CARIBOU, Maine — Peter Baldwin will become Caribou Library’s new director this August. At 25, he will be the youngest person to ever hold the position, and the first man.

Baldwin will officially start his new job after current director Hope Shafer finishes her last day on Aug. 2. Shafer announced her resignation in May — she’s moving to Alaska to follow her husband to a new job.

Like Shafer before him, Baldwin started at the library as a circulation assistant. Having come into the role in June 2020, Baldwin also follows his predecessor in the tradition of relatively new employees making the leap to the directorship.

While he’s only just completed a year at the library, Baldwin is excited to pick up where Shafer left off, and has a particular passion for expanding access to library resources. One of his goals is to establish a bookmobile, to bring the library to patrons who may not be able to access the building physically.

Many of Baldwin’s ideas center on Caribou’s aging population — the bookmobile, for example, might be able to bring library books and resources to people in nursing homes, and people who have to stay at home for medical or personal reasons. He said he’s inheriting the interest from some of Shafer’s personal passion for working closely with Caribou’s senior living facilities. They share the belief that a library should cater specifically to its community.

On top of that, Baldwin has witnessed his grandmother, who lives in an assisted living facility, struggle this year with being stuck at home and unable to enjoy the wider community.

“She doesn’t have the luxury right now of being able to leave and go places,” Baldwin said. “It’s something that I’ve more or less found an interest in and want to do as much as I can.”

Baldwin said he’s looking forward to moving into in-person programming as COVID-19 restrictions lift further. He runs the Dungeons & Dragons program online right now, and said that while the idea is strong, technical difficulties have put an unintended end to some campaigns.

“It’s been really interesting. I grew up in libraries. I knew how things more or less functioned,” Baldwin said. “From programming virtually, helping to figure out the ins and outs of in-person services, people calling more often to renew books rather than coming in and talking … I think it’s definitely been a change … I think it offered up a few new avenues for us, actually.”

One thing Baldwin said he would struggle with is seeing Shafer go. Both described the transition as a combination of heartbreak and excitement.

Shafer will be four hours behind in Alaska, but she’s an early bird, and said she would be up at 4 a.m. to help out as soon as the library opens if need be. At the same time, she’s confident she’s leaving the place in good hands with Baldwin and the other staff. In Baldwin, Shafer sees a reflection of her own passion for the job.

“Something neat about Peter was … two weeks after he started, he came to me and said, ‘I just want you to know, I love my job. This is my happy place, I love my job,’” Shafer said. “The neat thing is, that totally resonated with me because that is how I felt the moment that I started working here.”

On July 13, the library board of trustees hosted a small gathering in one of the building’s front reading rooms to celebrate Shafer’s contributions to the library. Guests signed a book for Shafer to take with her to Alaska: a collection of Paul Cyr’s photography titled “Northern Maine.”

“[Shafer has] been amazing. She’s brought such life and vitality,” she said. “We are going to miss her terribly.”

Members of the Houlton Band of Maliseets will head to the ballot box in order to determine who will be elected as their new tribal chief.
Pets END_OF_DOCUMENT_TOKEN_TO_BE_REPLACED