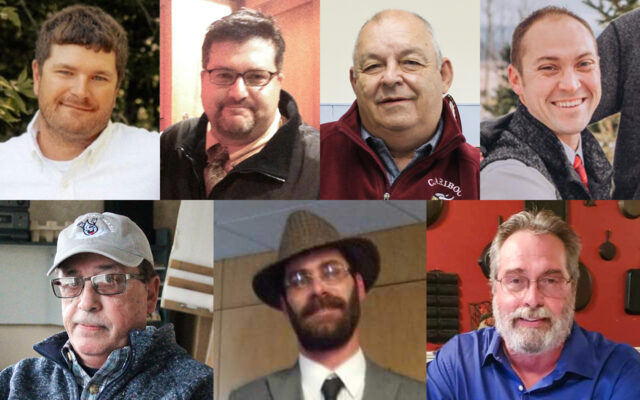 Mayor Jody Smith and Deputy Mayor Thomas Ayer are both running to try and secure their seats for another term, but they face challengers including former city councilors and first-time candidates for municipal office.

Whoever wins the races will join the council in a number of high-stakes discussions about the future of Caribou.

Debate about how to rebuild or remodel the city’s police station continues to divide the council, while progress on an initiative to drastically reduce the number of dangerous and nuisance properties in Caribou gets underway.

The next council will also be responsible for administering $801,892 of American Rescue Plan Act funds — $159,000 of which has already been dogeared for an initiative to bring broadband internet to every residence and business in Caribou.

All candidates will participate in a forum on Wed. Oct. 27 at 6 p.m. in the council chambers at City Hall. The forum will also be available via stream on the city’s Youtube page.

Voting will take place on Tuesday, Nov. 2 at the Wellness Center from 8 a.m. to 8 p.m. Absentee ballots and sample ballots are available online or at City Hall.

After spending a lot of time considering whether to run for city council, Bill Merchant — who will appear as William on the ballot — decided he was done waiting for someone else to get things done in Caribou.

After starting as a CNA in high school, Merchant went on to get a degree in radiology and worked in short-staffed hospitals across the country. Merchant left the medical field this year to work in construction, but said his time spent in hospitals prepared him to be a leader that works with people with diverse styles and priorities.

Merchant wants to tap into the resources of his neighbors and encourage community service as a way to revitalize the city. Projects as small as replanting flowers and fixing up the island at the roundabout could go a long way to drumming up community engagement and pride in Caribou, he said.

Merchant hopes to encourage new businesses by pairing young people hoping to start a business with established business owners to encourage mentorship and mutual growth. The restrictions on construction and land use in Caribou, he added, must be eased to facilitate economic development.

While he hasn’t served on the council before, John Morrill has worked with the city in a volunteer capacity for many years. As the founding director of the Caribou Snowmobile and ATV Clubs and a member of the now-defunct Caribou Chamber of Commerce Industry Board, Morrill said he learned how to promote development and navigate small-town politics.

Caribou is at a crossroads, Morrill said, with enrollment up at the schools and people moving in from southern Maine and out of state, now is the chance to improve the city and reverse decades of population decline.

To do that, he said, the council will have to take care of the city’s dilapidated buildings, especially in residential neighborhoods, and update the antiquated Chapter 13 zoning and land use rules.

Morrill described himself as a no-nonsense person who would lead with common sense. This is the time to invest in the community and its services to move the city forward, Morrill said.

After several decades serving in the U.S. Air Force and a second career as a nurse at Cary Medical Center and nursing homes in Van Buren and Houlton, Paul Watson wants his third chapter to be in public service.

Like other candidates, Watson said Caribou is at a potential turning point, and that a combination of implementing exciting events and essential upgrades to public services could turn the city into a “bucket list” community for travelers and new residents.

One of his key priorities is taking care of public workers by investing in fire, police and public works — departments which he says are essential to the long-term success of the city.

Watson promises to get the community more involved in revitalization efforts by working with local creatives and business owners, and said that he will lead with an open mind, and be willing to hear the concerns and ideas of all constituents, whether or not they voted for him.

“One of the things you see often, especially in rural areas, is this stalemate of ‘this is our mindset and it’s always been this mindset. In order to survive in today’s world, we’re going to have to expand that,” Watson said. “If you want to make a better community, you need to bring every piece together like a 3D jigsaw puzzle.”

Caribou Utilities District General Manager Hugh Kirkpatrick served one three-year term on the city council between 2017 and 2020, and is seeking another chance to work on his priorities with the city.

Kirkpatrick’s first priority is making Caribou’s municipal taxes the lowest in Aroostook County, which he considers essential to attracting businesses and supporting economic development efforts in the city. Rewriting the Chapter 13 development rules is also a priority for Kirkpatrick, who says the old language discourages growth.

As a part of the nonprofit Business Investment Group, Kirkpatrick is already familiar with some of the ongoing projects in Caribou, including the broadband project and the riverfront redevelopment committee, which he said will help him acclimate quickly and work on those projects should he win the election.

While keeping taxes low is essential for Kirkpatrick, he said he wants to invest in the city as long as spending is well thought out and managed.

“The citizens of the community demand a certain level of service,” Kirkpatrick said. “My philosophy is that the taxes they pay should deliver those services at the best value. That doesn’t mean at the least cost, [but] the best value.”

David Martin didn’t plan on running for city council again, but when friends reached out and asked and after watching the debate and discord at current council meetings, he obliged. Martin served on the council for 12 years between 2007 and 2019, and works as a tutor at Caribou High School, where he has spent most of his career.

Martin hopes to promote a philosophy of respect and optimism. Maintaining the city’s good infrastructure — like its new school — and taking care of its employees are two major priorities for him.

Caribou has a lot of potential both as a tourism destination and as a place for families to live, Martin said, and the division on the current council, Martin said, is distracting people from the projects that need to get done.

According to Martin, his years of experience on the council have made him a level-headed leader, and should he be elected, he wants to work with councilors and residents on mediating disagreements and finding the best path forward for everyone.

“If something really upsets me, I’ll wait a day or two before I do anything about it. If I’m still upset after two days, I think, ‘Well, okay.’ Otherwise I just move on,” Martin said. “I’m not afraid to let the people vote and I’m not afraid to be voted down because if that’s what the majority wants, I can live with that.”

Caribou Deputy Mayor Thomas Ayer is running for reelection and hoping to continue his work in lowering taxes in Caribou and promoting economic development.

Ayer said voters should look at his record on council so far, particularly the hand he’s had in lowering the city’s tax rate by one mill last year and in major projects like the broadband initiative.

This term, he hopes to get the community more involved in the work of the city council, and encouraged people to come to him directly with their questions and concerns.

On top of keeping taxes down, Ayer said the key to development will be taking another look at the city’s land use rules, which he said are far too restrictive for businesses and are playing a part in driving people to other nearby towns like Presque Isle.

Smith said it took awhile to get acclimated, but he’s now engrossed in the city’s ongoing projects like the police station, the riverfront redevelopment committee and the broadband initiative. He also pointed to achievements like Caribou’s new splash pad, which he helped bring online this year.

Voters should look to his record as a mediator and a moderate, Smith said; he’s not afraid to vote his conscience even if it means voting with a group on one issue and against it on another.

The mayor has repeatedly been the deciding vote on the divided council, most recently on recent votes on a police station referendum where he supported the initiative to allow the public to vote on the design, but favored including financial impact information on the ballot.

“I spend a lot of time speaking to the councilors not at the meeting — finding out what it’s going to take … find the common ground, find what’s reasonable,” Smith said. “You’ve got to be willing to do what’s right.”

For the first time since 2019, there is competition for open seats on the Houlton Town Council

Five candidates vying for seats on RSU 29 school board

Interest in serving on the RSU 29 school board appears to be at an all-time high as five candidates are seeking to fill three open seats on the board.

Limestone and New Sweden will both hold their elections and town meetings in June, with elections happening before the annual town meetings.
Pets END_OF_DOCUMENT_TOKEN_TO_BE_REPLACED