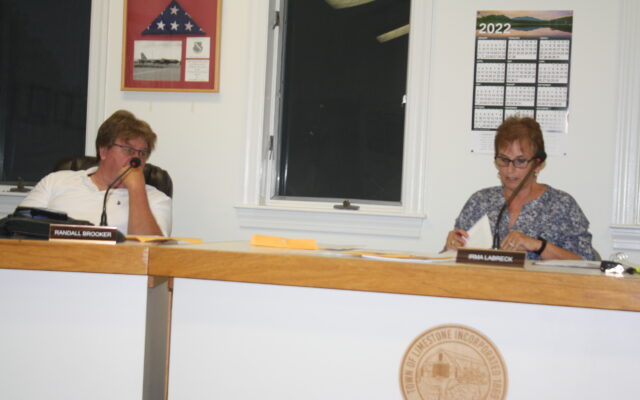 Last year’s mill rate had been the result of a steady increase over the years. Limestone’s mill rate had been 25.16 and 20.62 mills in 2020 and 2019, respectively, according to Maine Revenue Services. The rate had hovered around 22 to 24 mills throughout that decade, with the lowest rate in state records being 19.91 in 2011.

After seeing residents cut many department budgets during the annual town meeting in June, most select board members agreed that maintaining a conservative mill rate would be best, given the rising costs of fuel, groceries and other living expenses.

“I don’t want to tax people any more than we should,” said Jesse Philbrick, who made the motion for the mill rate of 28. “If we put the mill rate up and some people don’t pay their taxes, it’s the ones paying their taxes who will get hurt.”

Chris Durepo cast the lone “no” vote for that mill rate, fearing that it would be too low given adjustments made to the town budget after the annual meeting.

A majority of residents voted to decrease several of the select board’s proposed budget totals, including for recreation and the library. Other departments, including police and fire, saw increases.

Though Fred Pelletier suggested a slight increase in the proposed rate — to 28.75 — Board Chairperson Irma Labreck and Vice Chairperson Randy Brooker ultimately agreed with Philbrick and cast votes in support of the 28 mills.

Limestone currently has seven vacancies within its town departments, with most of those being for top positions, including town manager and police chief. While many of those vacancies are being filled by interims, the town is looking to hire permanent replacements.

In late August, the select board accepted the resignation of Tara Henderson as town manager and appointed Jim Risner to that position. Risner, the former town manager of Fort Fairfield, will be interim manager until at least Nov. 30.

Earlier this month, the select board appointed Fort Fairfield Sgt. Jesse Cormier as the part-time interim police chief. Since negotiating its police budget with residents, Limestone has hired one full-time officer. Cormier recently received two more applications for full-time officers, according to Labreck.

The town is also lacking a recreation program director, librarian, highway foreman and a truck driver/equipment operator for the highway department.

Though a job advertisement for the driver and operator position has been public since early August, the department has not found qualified applicants.

“We’ve tried to find people who may be looking for a job right now, but we’ve had no luck,” Keiser said.

The situation has become more dire because Keiser is currently on a two-week vacation, with his co-worker taking two weeks off after that, Brooker said.

“There’s no way we can expect those guys to do all the work we ask of them and then get ready for the winter,” Brooker said. “We need to look at possibly getting some part-time help.”

Henderson said that although she has been unable to revise and post most of the job advertisements, she would discuss the matter with the incoming manager.

In other business, the select board thanked Henderson for her service to Limestone and welcomed Risner. Risner, who began work on Friday, Sept. 9, said he would primarily be in the town office Tuesday through Thursday, but plans to be flexible based on the town’s needs.

“I’ve always enjoyed town management work because you’re working with the people of the town,” Risner said. “I’m grateful for the opportunity and want to do what I can to help.”

The next regular select board meeting is scheduled for 6:30 p.m. Wednesday, Sept. 21, in the Limestone Town Office, 93 Main St.

Next year's Caribou City Council will include a new member and a longtime councilor thanks to Tuesday's election.
Pets END_OF_DOCUMENT_TOKEN_TO_BE_REPLACED

Happy fall to you all.  It has been a super beautiful one so far. The harvest has gone well and the temperatures have remained warm, so enjoy these rare days because before long we will be into the winter months, and we all know what that means.
What's Happening This Week END_OF_DOCUMENT_TOKEN_TO_BE_REPLACED