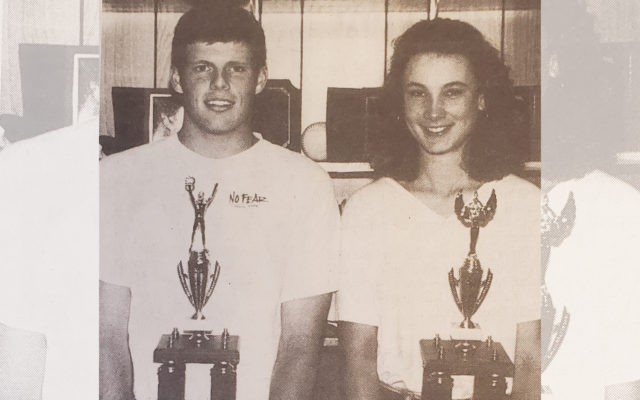 Yvonne Tardie • June 17, 2020
75 Years Ago -  June 21, 1945 St. Pierre promoted to corporal -- At the headquarters, Pacific Division, Air Transport Command, it was announced that Wilfred St. Pierre of Presque Isle, the son of Mr. and Mrs. Zelix St. Pierre, was promoted to Corporal in the United States Army Air Forces,

St. Pierre promoted to corporal — At the headquarters, Pacific Division, Air Transport Command, it was announced that Wilfred St. Pierre of Presque Isle, the son of Mr. and Mrs. Zelix St. Pierre, was promoted to Corporal in the United States Army Air Forces,

according to an announcement from his commanding officer. Cpl. St. Pierre entered the service in 1942 and was assigned to the Pacific Division of the Air Transport Command and assigned to a station in the Hawaiian Islands.

Six Lavaway brothers entered the armed forces — Donald Lavaway, son of Mrs. and the late Fred Lavaway, of this city, left for Portland to report for training. This was the sixth son in this family to enter the service. The oldest, Pvt. Richard Lavaway, received a medical discharge after serving 11 months in the Air Forces and resided at Amarillo, Texas. Cpl. Elmer Lavaway, formerly employed by Cole’s Express, in this city, served 13 months in the Pacific area and since his return, had been assigned to Fort H.G. Wright, Long Island, N.Y. E.M. 1/c Milton Lavaway U.S.N. was stationed in the Pacific. S3/c Patrick Lavaway was with the Seabees at Camp Endicott, R.I., and Sgt. Frederick Lavaway was stationed at Pratt, Kansas.

Local girl won a state level award — Susan Jane Hillman, a 1970 Presque Isle High School graduate, was honored at a special Kiwanis luncheon in Augusta. Miss Hillman, along with four other Maine Youths, was awarded a $1,000 scholarship by the Augusta Kiwanis Sunshine Scholarship Foundation. This foundation was sponsored by the Sunshine Biscuit Company and administered by the Augusta Kiwanis Club. Selected from over 126 outstanding Maine high school graduates of 1970 senior class, Miss HIllman placed sixth in her class of 240. She was Tri-Hi girl of the year and secretary of her Student Council for two years. The criteria for selection of a Kiwanis Sunshine Scholarship is based on both academic excellence and financial need.

Houghtons chosen farm family — The Fort Fairfield Chamber of Commerce announced the Houghton family of Fort Fairfield as farm family of the year for attention to potato quality and its customers. Tim and John Hougton, who traced their farming roots in Fort Fairfield backt to 1900, raised 550 acres of seed potatoes and 500 acres of oats on Houghton Farms Inc. They were the fourth generation of their family to run the farm. The brothers use foundation seed, which is the most disease-free seed available to farmers. They sell most of their product to customers located in North Carolina and Florida, as well as some in Pennsylvania and Rhode Island.

Just when we thought we were out of the woods with kitten season, it has hit full force.  The past few days have been difficult answering the phone and hearing the stories of why people have litters of kittens they need to surrender.
Campaign Corner END_OF_DOCUMENT_TOKEN_TO_BE_REPLACED