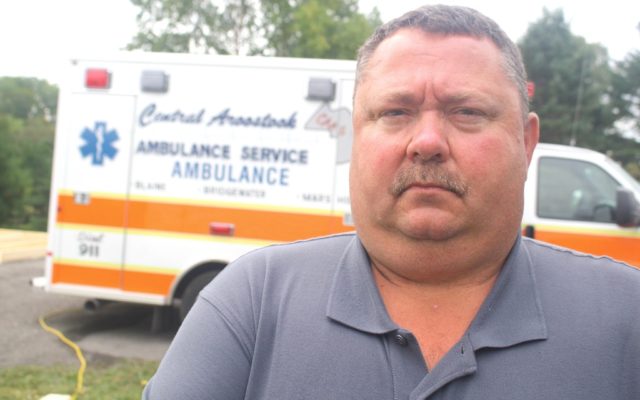 Central Aroostook Ambulance Service gets into gear with new headquarters

David Marino Jr. • September 9, 2020
The Central Aroostook Ambulance Service has been based from a former home at 150 Military Road in Blaine since the beginning of August.

BLAINE, Maine — Nearly a year after residents proposed creating the service during a meeting in Mars Hill, the Central Aroostook Ambulance Service has finally taken shape.

Temporarily located at the Continuing Care nursing home in Mars Hill when it started in May, the service has been based from a former home at 150 Military Road in Blaine since the beginning of August.

A garage that will contain two ambulances is under construction with the help of local volunteers.

The Central Aroostook Ambulance Service was created after the three towns it covers — Mars Hill, Blaine and Bridgewater — risked losing ambulance coverage when Northern Light Health opted out of its contract with the towns in August 2019. The three municipalities quickly approved and funded the service early this year, with the Maine Legislature and Gov. Janet Mills signing off in February.

For the aging rural communities it covers, the service may mean the difference between life and death. And amid ambulance coverage issues across Aroostook County, the semi-municipal model pioneered by the three towns might represent a model for other towns across The County and state to follow.

Manager/Paramedic Lee Farley of Washburn said response numbers had started slowly in May with 13 calls, but had picked up in the following months. There were 33 calls in June, 15 in July and 33 in August. The service’s goal is to respond to 250-300 calls a year, or about one call per day, Farley said.

The calls have brought the ambulance all over its coverage area: from Mars Hill to Bridgewater to E Township (popularly known as E Plantation). Most have been standard ones for an ambulance service — shortness of breath and chest pains are some of the most common. Farley said the ambulance had also responded to some trauma calls.

The service also responds to fires, most recently one at a home that was under demolition in Bridgewater on Aug. 26. It has also provided mutual aid to Presque Isle Fire and Ambulance and vice versa and is ready to respond to calls from Houlton.

“If we’re not backed up from a 911 call, we plan to support our fire departments,” Farley said. “They do a lot for us, and we want to return the favor.”

There had been some growing pains for the new service, Farley said. It initially had difficulty acquiring personal protective equipment — more commonly known as PPE — because of shortages nationwide during the early stages of the COVID-19 pandemic.

Farley said supplies have since increased, and the service has acquired necessary PPE, though it still needs to purchase a $17,000 Stryker stretcher, a battery-powered stretcher known for efficiency.

Additionally, while the service currently has two ambulances, it only uses one at a time. Farley said the service hopes to add measures in a future budget to allow the full-time staffing necessary for two ambulances to be available at all times.

While Farley was initially the only full-time staff member, the service has since hired another full-time EMT currently receiving paramedic training at Northern Maine Community College in Presque Isle.

The service also has 10 part-time licensed providers (EMTs and paramedics) and five drivers who are on call. Employees come from across The County: Washburn, Presque Isle, Fort Kent, Van Buren and Easton.

Farley said the communities have been very supportive of the new service, donating labor and materials from cash to lumber to blankets for the garage as well as the headquarters.

“It’s only been positive feedback so far, and we hope to continue that,” Farley said. “Because at the end of the day, it’s the public that is paying our bills.”

Members of the Houlton Band of Maliseets will head to the ballot box in order to determine who will be elected as their new tribal chief.
Pets END_OF_DOCUMENT_TOKEN_TO_BE_REPLACED