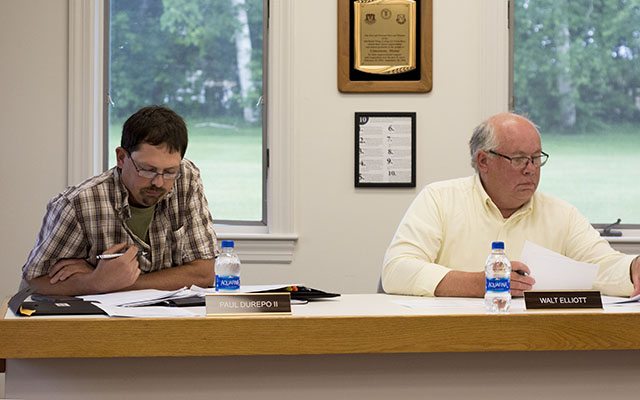 The board voted unanimously to hire former select person Walt Elliot, who served several terms in from the early to mid-2000s before being reelected in 2018. He stepped down in 2020.

“I spoke to Walt today and he said he’s willing to be town manager until a new town manager is found,” said Board Chairperson Irma Labreck.

Labreck said the board expected Elliot to begin work on Sept. 22 and that pay and hours are yet to be negotiated.

Elliot’s hiring comes at a crucial time for the town. Former town manager Tara Henderson recently resigned after less than a year on the job, citing burnout among town staff and no longer wanting to “sacrifice [her] personal goals and compromise [her] core values.” The board replaced her with Risner, the former town manager in Fort Fairfield.

For that reason, the board voted unanimously to pursue a potential contract with the Maine-based law firm Eaton Peabody to aid in the search for a new town manager.

Vice Chairperson Randy Brooker questioned whether the proposed total payment of $10,000 to $12,000 to the firm would be worth it, considering that the town paid $6,000 to Maine Municipal Association for past town manager searches.

“What are our other options?” he asked.

Labreck said that the town is considering Eaton Peabody in part because MMA consultants are busy with other clients until January 2023.

She said that the town could benefit from working with people who have experience finding qualified applicants.

“My concern is that we’ll fall into the same place [as last time],” Labreck said, referring to Henderson’s hire. “We need someone with management experience and skills.”

Prior to her hire in 2021, Henderson had worked for nearly two decades at Aroostook Agency on Aging. The most recent town manager scouted by MMA — George Finch — resigned in 2021 but said he told the town that he would work on a temporary basis.

Aside from the town manager, Limestone also faces many vacancies in departments, including that of a recreation director, highway foreman and librarian.

“As of Sept. 27, we will have two full-time officers,” Cormier said. “This means the town will be covered up to 20 hours a day.”

Limestone Police Department has struggled to hire officers over the past year and mainly relied on reserve officers, the Aroostook County Sheriff’s Office and Maine State Police.

Cormier, who is also a police sergeant in Fort Fairfield, told the board that the Maine State Police could be available to cover the four hours between his two officers’ shifts. He also said that he would continue working to hire full and part-time officers to rebuild Limestone’s department.

Gubernatorial candidate John Glowa said that he wants to spur government reform that truly creates a system of, by and for the people when he visited Presque Isle City Hall.
Pets END_OF_DOCUMENT_TOKEN_TO_BE_REPLACED

The kittens just don’t stop! Yesterday, we took in a mom and four babies. One of those babies was injured. It is really hard to understand the amount of kittens coming through our front door.
What's Happening This Week END_OF_DOCUMENT_TOKEN_TO_BE_REPLACED