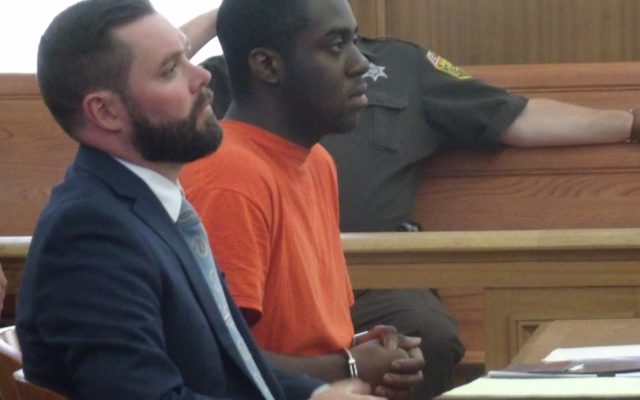 Jen Lynds • November 13, 2018
Greed and drugs motivated a Massachusetts man to gun down an Oakfield resident in his car two years ago after a drug-related robbery in Sherman, prosecutors said Tuesday.

HOULTON, Maine — Greed and drugs motivated a Massachusetts man to gun down an Oakfield resident in his car two years ago after a drug-related robbery in Sherman, prosecutors said Tuesday.

The first day of the trial of Marcus Asante, 23, of Fitchburg, Massachusetts, on charges of intentional or knowing murder and robbery began Tuesday morning in Aroostook County Superior Court in Houlton.

Asante is accused of fatally shooting Douglas Morin Jr., 31, on Oct. 16, 2016. Prosecutors allege that Asante is the one who pulled the trigger as Morin Jr. sat in his Lincoln Town Car on the PD Road in Sherman. Two other individuals, Tia Leigh Ludwick, 24, and Darin Goulding, 32, both of Leominster, Massachusetts, also were implicated in the crime.

Assistant Attorney General Donald Macomber told jurors Tuesday that friends of Morin found him slumped in his car with nine gunshot wounds a short time after the murder.

According to Macomber, Ludwick, who was Morin’s cousin, contacted him about buying ten pounds of marijuana. Morin reportedly combined his own stash with another man’s marijuana to make up the total weight and showed up to make the sale.

But Ludwick, Goulding and Asante “had no intention of paying for it,” said Macomber. “They were planning to rip Morin off.”

According to the prosecutor, the trio drove up from Massachusetts with another woman who owned the car they were in and who will testify during the trial.

When they arrived to meet Morin, Macomber said, they were surprised to see that two other men had accompanied him for security in a separate vehicle. The Massachusetts group initially indicated that they did not want to make the purchase after seeing the other men present, but then agreed to it after Morin sent the two men away, because he “needed the money,” according to Macomber.

The two men did not witness the shooting but watched the group leave from a distance after the murder, according to the prosecutor.

Macomber said that Asante, who was sitting in the back seat of the Lincoln at the time, shot Morin multiple times.

Maine’s former deputy medical examiner, Dr. Claire Bryce, later detailed for jurors Tuesday the nine gunshot wounds she found during Morin’s autopsy. Bryce said that the fatal wound entered his right temporal scalp and exited the left side of his nose, while another wound entered the back of the neck, travelled through soft tissue and bone before hitting the brain stem. Morin also was hit in the back of the neck, through the right shoulder, and in the hand and had several graze wounds to his skin.

Two Maine State Police investigators testified Tuesday about bullets and shell casings found at the scene. Cpl. Micah Perkins said that one of the bullets fell from Morin’s body as he was pulled from the car, and another was lodged in the driver’s side window.

Brian Kelley, a Massachusetts attorney representing Asante, told jurors that there was a “disagreement” over the weight of the marijuana and that the state does not have Asante’s DNA on the firearm. He also maintained that Asante did not live with Ludwick but only “frequented” her apartment.

Kelley also noted that Goulding pleaded guilty in February to robbery in exchange for the state dismissing the murder charge against him if he agreed to testify against Asante. The defense attorney said that Goulding would testify only because he got a deal and had changed his story about the events of that day. Goulding has not been sentenced yet.

Ludwick pleaded guilty in February to murder and robbery and was sentenced in April to 17 years in prison.

Assistant Attorney General John Alsop also is prosecuting the case, and Asante is being co-represented by Attorney Adam Swanson.

Members of Morin Jr.’s family, who were present in court Tuesday, previously have said that he was a logging truck driver who was due to return to work after having been laid off for about a year.

Three of Asante’s relatives also were present in court Tuesday.

Justice Harold Stewart II, who is presiding over the trial, ended the proceedings at about 2 p.m. because of the snow storm.

For the first time since 2019, there is competition for open seats on the Houlton Town Council
Pets END_OF_DOCUMENT_TOKEN_TO_BE_REPLACED

We hope everyone enjoyed a wonderful holiday season and is looking forward to the new year.  December was a busy month at the Central Aroostook Humane Society with so many people and businesses bringing in much-needed supplies and monetary donations, which help us to take care of the special temporary pets in our care.
What's Happening This Week END_OF_DOCUMENT_TOKEN_TO_BE_REPLACED